Java Persistence API (JPA) provides the specification of managing data, such as accessing and persisting data, between Java Objects and the databases.

There are obviously many ways in JPA that could be used to interact with a database such as JPQL(Java Persistence Query Language), Criteria API, and Entity specific methods such as persist, merge, remove, flush etc.

I initially found Criteria API quite intimidating. To be frank, I had to invest quite some time to figure it out. It eventually turned out to be quite fluent API. I thought why not just write about the experiences. So here it is, “Creating Programmatic Criteria Queries using JPA Criteria API”.

We will be using the following domain model for building the criteria queries in this tutorial. 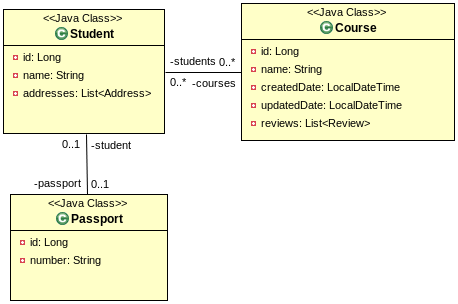 We have three Objects( ref. to diagram above ) Student , Course and Passport. Each of the Objects has a relationship with each other:

We will begin with a simple Criteria Query and slowly try to build upon it.

The above code example retrieves the total count of students present in the database.

Criteria queries are an Object graph where each part of the graph represents an atomic part of the query. The various steps in building the object graph roughly translates to the following steps.

The final output of the above example is below :)

It seems quite the over work–doesn’t it. The output of so many lines of code is just a plain old SELECT query. But the Criteria API was created to serve a different purpose i.e programmable Query API. It helps to build queries dynamically. You could write just one program to build queries for all objects in your application or build queries depending upon your business logic.

Let’s say, we want to get the count of either Students, Courses or any other entities present in our application. We could either write different queries for each of them or we could only use Criteria API.

I have only updated the previous example to allow the generic parameter which specifies the Class of the Entity. Rest of the Code stays the same. You can learn more about Java Generics here.

Let’s look at the above example in detail.

CreateQuery method takes the Class name of the result type as an argument.

The Root refers to the entity on which the query would be run such as Student.class in the above example.

The select method specifies the result to be returned by the Query. If all the attributes of an entity are supposed to be returned instead of just returning the count, we could pass the root entity as the parameter such as below. 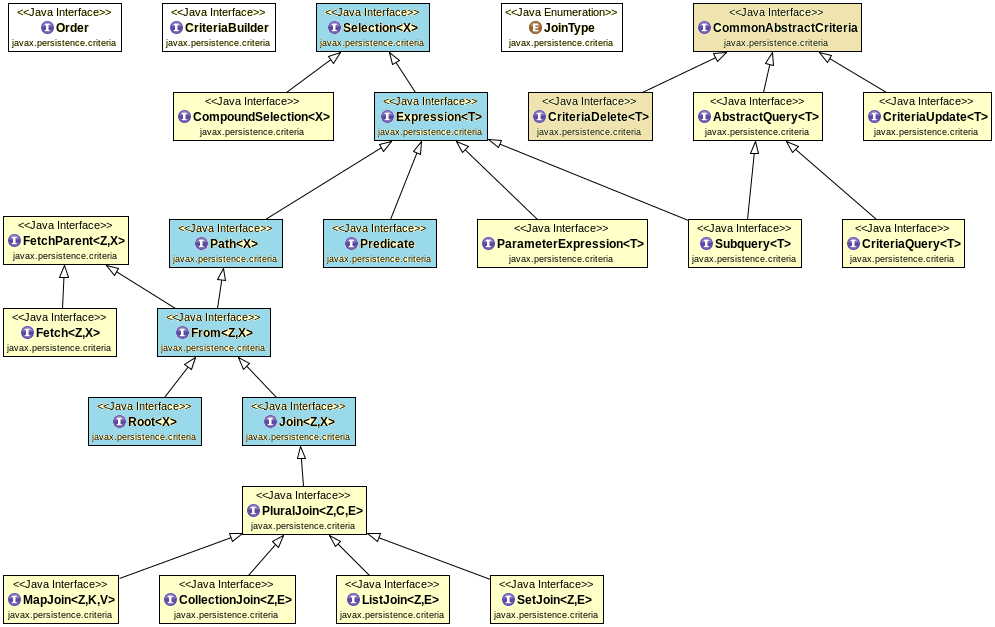 In the Above diagram, observe the classes in a blue background. The relationship tree explains the inheritance hierarchy among various interfaces present in the Criteria API.

Root Interface is also an expression. It means, we can query a complete entity by passing Root as a parameter to the select method. In case we want to fetch a selected attribute, we can fetch the attribute path using root.get(attributeName). This method returns a Path object which inherits expression.

When a collection parameter is passed to the get method, it creates a path to corresponding referenced collection-valued attribute. This results in the creation of an INNER JOIN query.

Let’s go back to our domain objects. Student has a OneToMany relationship with Address. To fetch the address, we can use the root.get('address'). Below is an example.

Output Query for the above example looks like as below:

Note: Since the Address is the Owner of the relationship between Student and Address. By default, the fetch type for a OneToMany relationship is lazy fetch. As a result, there would be extra queries fired to initialize the Student entities related to each Address. However, If we add a where clause and specify a restriction or predicate, it would only result in a Single Query.

Ideally, when we define relationships in JPA, the Join will be based on the related ID column. However, if we want to define the restriction based on some other column, Join.on(Predicate...) can be used. Join also provides a way to traverse the attributes of the joined entity such as join.get(attributeName).

The output of the above code example is quite different than what we saw in the implicit join. The initial query only fetches the address id by doing the INNER JOIN. Each of the entities in the relationship is fetched lazily using separate queries

After all the Id’s are fetched, One query is used to fetch Student and Address details by doing an OUTER JOIN on Student id and address.Student_id.

Note: If a restriction is provided in where method of the CritieriaQuery. It would result in a single query.

FETCH tells the JPA to override the declarative fetch definitions provided through annotation such as @ManyToMany(fetch=FetchType.LAZY) and initialize all the associations or relationships eagerly. As a result, only one query is created.

The above query output is only a single query as below:

Group By and Having clause

GroupBy — method is part of the CriteriaQuery Interface. It either takes one or a List of Expressions as parameters. These expressions are used to form groups over the query results. Below is the signature of the groupBy methods.

Having — method is also part of the CriteriaQuery Interface. It either takes a simple or compound boolean Expression or one or more Predicates as parameters. The expression or predicates provided specify the restrictions over the groups of the query. Below is the signature of the having methods.

To build a Criteria Query which uses the group by and having methods– Let’s assume, we need to fetch all the Students with the number of Addresses greater than or equal to three(3).

The output results in an SQL with an INNER JOIN between Student and Address on Student_id column. It fetches students with restrictions provided by HAVING clause on aggregate function mentioned by Group By clause.

The order by keyword is used to sort the fetched data either in ascending order or descending order of the value of a column. It can also include aggregate functions.

The Order interface provides the below methods

The CriteriaBuilder interface provides the following methods to enforce order in a criteria query.

The output query produced by the above criteria query is below:

subquery method is part of CommonAbstractCriteria interface. This interface provides functionality which is common to both top-level criteria queries as well as subqueries.

Let’s change the above example to include a subquery.

Below is the output of the final query produced–

We have already seen in our initial example, how to use aggregate functions such as count.

If you have come this far, you might also want to learn about — how to select values in criteria Queries. This post explains various methods provided in Criteria API to select single or multiple values. It also explains tuple criteria queries.

If you have any feedback, let me know in the comments below and don't forget to give a thumbs up.